Innovation is one of the crucial drivers for the development of many aspects of modern society, in particular engineering that depends on new ideas and technologies to plan, design, build, maintain, and life-cycle management. It is embedded in the Sustainable Development Goal 9, and other SDGs as well, to build resilient infrastructure, promote inclusive and sustainable industrialization and foster innovation.

To capture and share the innovative thoughts and activities all around the globe, The Committee on Engineering for Innovative Technologies (WFEO-CEIT) is now doing a serial of innovation stories to take a close look at the creativity that we hope could inspire the readers and help better the future.

The team built an ice flood prediction and forecast tool-box based on neural network, fuzzy mathematics and artificial intelligence.

The first story is about a group of young engineers in the field of water who have developed a new toolbox on the freezingly cold river ice to prevent ice-jam flooding in the high-latitude northeastern area of China.

Flooding Risks in the Frozen River

Mohe (53° 29′ N), famous for its nickname of Beiji Cun (literally, northernmost village) in China, is a county-level city to the south of the Heilong River (literally black dragon river in Chinese), a boundary river that is also known as Amur River in Russia. Winter is extremely cold here – the ice sheets in the river can be thicker than two meters. In the end of April when the sheets melt, ice surface cracks and huge ice blocks travel down the river. In some circumstances, the ice blocks the river channel to form ice dams and result in severe floods. Before 2012, there would be a flood caused by ice jam in almost every three years in this river, threating people’s lives and properties.

A good way to prevent ice floods is to blast the ice sheet at the highly risky river sections in advance, and that engineering procedure needs theoretical support from scientific research. Different from China’s sandy Yellow River where scientists have gained rich experience of ice flood prevention, research about this cold-region-based river lags behind with very insufficient data.

Then, a research team of engineers from China Institute of Water Resources and Hydropower Research (IWHR) undertook this arduous task through the project of “Ice Flood Prediction and Disaster Reduction in the Heilong River Basin” sponsored by the Ministry of Water Resources of China.

From Zero to Innovations

Paper on this achievement was published on Cold Regions Science and Technology, an authoritative journal of ice engineering research in October 2018, and was promoted by Science Trends, a famous popular science website in the United States.

Applying observation data and previous record of local weather and water level to their work, the team then built an ice flood prediction and forecast tool-box based on neural network, fuzzy mathematics and artificial intelligence.

Ice blasting engineering is another key to the success of the project. The team established the functional formula between radius of blasting hole and thickness of ice sheet, depth of water under ice and amount of explosives to be used. That formula helps predict the effect of blasting with more accuracy and efficiency, while saving more than 50% of explosives.

“Since IWHR took charge of the blasting with our innovative techniques, the risks of ice jams in the upper Heilong River have been largely reduced, and there hasn’t been a single ice flood caused by ice dams in recent five years,” said proudly Dr. Xinlei Guo, team leader of the project. Their remarkable achievement not only was reported by CNN specially, but also appears in the China Central TV news every year in spring.

Screenshots of news reports by CNN and CCTV

With concrete support from local authorities in Heilongjiang Province, the team has measured river sections of over 200 kilometers in total, conducted continuous observation and kept record of 14 ice-water parameters (including temperature, solar radiation, ice porosity, wind speed, flow velocity, etc.), developed five sets of new-type ice-water measuring equipment, and obtained first-hand data of over 100 gigabytes. The hydraulic theories about river ice and prevention system of ice-related disasters developed by the team give preliminary answers to the following key questions in ice flood prevention:

The team’s work has reduced ice flood damages along the Heilong River, successfully protecting lives and properties in local area.

Behind the success is years of hard work of in-situ measurement in the outdoor temperature below -20 °C (-4 °F) on the frozen Heilong River in winter. Measuring instrument had to be inserted into the hole dug in ice, and when pulled up after a while the probe would always be frozen into ice tube. Therefore, they needed to always carry a thermos and melt the probe with hot water before each round of measurement.

“Innovation is the core of research. Only with innovation can we break the exiting mindset and constraints and find the solutions that are practical, feasible and workable.”
Dr. Hui Fu

Their typical day would start early in the morning and end after the sun sets, with the only short lunch break in the van with some scones, eggs and pickles. Spectacular as ice blasting might look in the video, it could be dangerous for the researchers who would have to walk, or sometimes crawl, on the seemingly thick ice that might turn out very fragile.

The challenges also came from long-term exposure to the ultraviolet light reflected by ice and snow in high altitude region. Even well-equipped, their faces could be sunburned and peeled after just a few days. That was dubbed by themselves “beautiful as a flower.”
“The process of innovation is full of success and failure as well, but during this process, we engineers are trained and improved to become psychologically stronger.” Said Dr. Tao Wang. 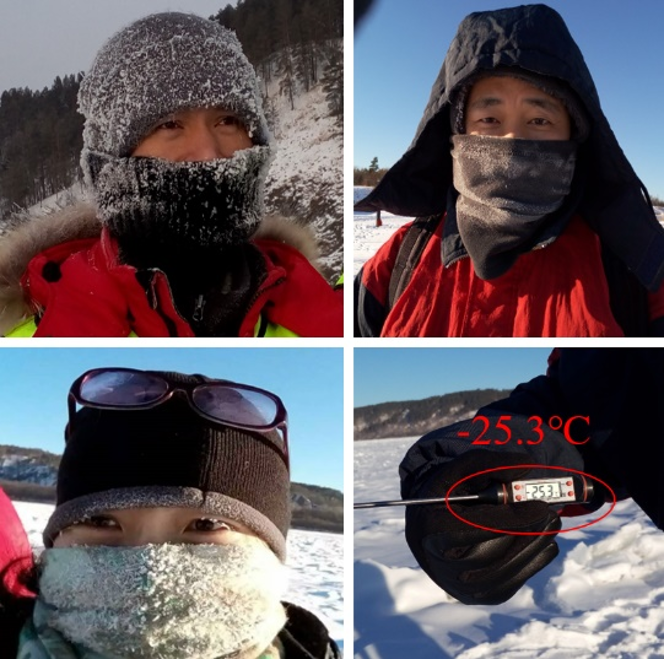 Blasting might seem an intuitive and natural way to combat ice-jam flooding prevention. However, when it comes to when, where and how to blast, things suddenly get complicated, and here is exactly where innovation can play an important role. 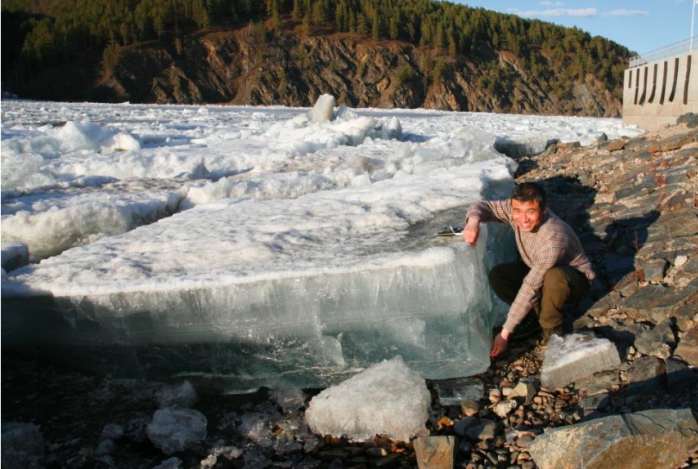 Dr. Hui Fu investigating the ices on the river surface

In the past, blasting used to be carried out too early or too late, so they used neural network, fuzzy mathematics and artificial intelligence to improve the accuracy of prediction. Both the thickness of ice and depth of water underneath need to be known to identify the best location for putting the explosives, so they invented the double-frequency ground penetrating radar.

And a functional formula was also developed to optimize the dose of explosives. Innovation helps them crack the technical problems, brings a strong sense of accomplishment, and builds them into a reliable team in the industry.
“To me, innovation means three things: opportunity, competitiveness, and leading advantage.” Said Dr. Guo. 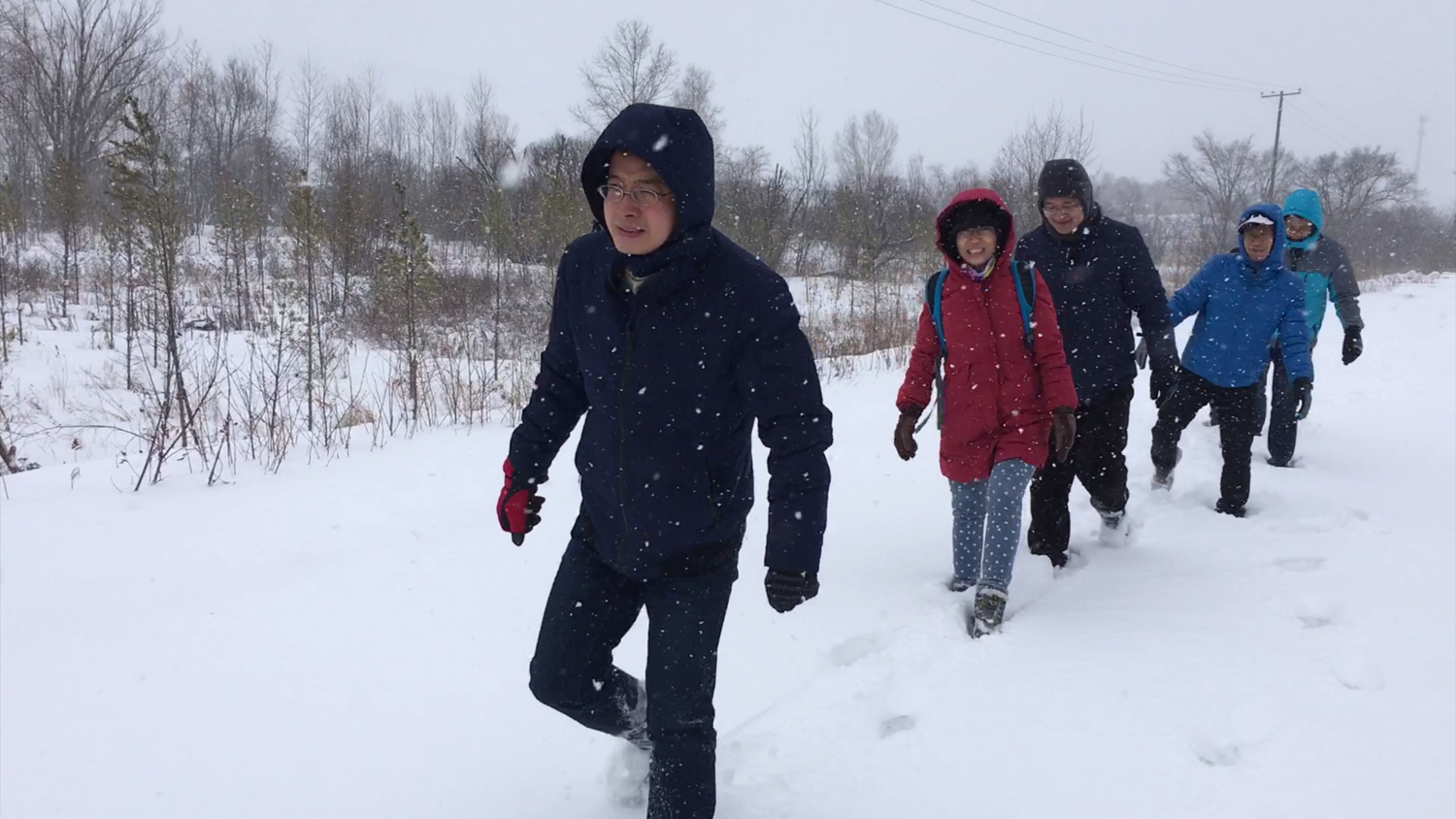 Dr. Xinlei Guo and his team walking with difficulty in heavy snow

The journey of innovation will never end. Next, the team will focus on simulation experiments combining water, sand and ice to look into the ice flood in the Yellow River, the most famous sandy river in the world whose middle reach is at a higher latitude than both the upper and the lower reaches. With the tool of innovation in hand and a sense of mission in mind, the team will push forward their engineering research and make use of the innovated tools to tackle the technical challenges and contribute to making the area along rivers a safer place to live in.

Report from Tong Li.
Tong Li is an employee from China Institute of Water Resources and Hydropower Research (IWHR). She interviewed and completed this article with assistance from the research team members, including Xinlei Guo, Tao Wang and Hui Fu. Her colleagues Jing Peng, Jianli Zhang, Yanwei Wang and Jindong Cai also contributed.

Increasing the participation of women in the climate change debate, including as leaders, is essential for a carbon-zero future

See below an article from Marlene Kanga published on 19th October on the International Science Council (ISC) website, on th...