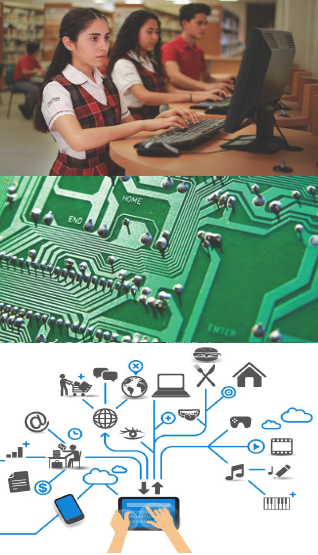 The World Federation of Engineering Organisations will celebrate its 50th anniversary during 2018 – an important milestone for the history and development of the engineering profession.

The last 50 years has been a time of unprecedented global advancements in engineering – man has landed on the moon, we have seen the personal computer and the smartphone developed and great advancements in information technology and communication.

New engineering disciplines have emerged including bio-medical engineering and we are seeing significant advances in data analytics, robotics and artificial intelligence.

Since being founded in 1968, the Federation has led the international engineering profession with contributions to global policies on the standards of engineering education, innovation, sustainability, capacity building and ethical engineering practice.

2018 will be an opportunity to celebrate the achievements of the Federation.

The calendar of events include the following events:

• The WFEO Symposium, UNESCO Headquarters
• The Paris Declaration
• The Co-operation Agreements
• The Symposiums at Instituto de la Ingenieria de España (IIE) and at Ordem dos Engenheiros (OdE)
• The video on the future of engineering
• The announcement of two new WFEO Awards
• The announcement of the Young Engineers Competition
• The International Women’s Day and WIE 10th Anniversary Celebration
• The WFEO Engineering 2030 Plan
• The Global Engineering Congress (GEC2018)
• The World Engineering Day for Sustainable Development 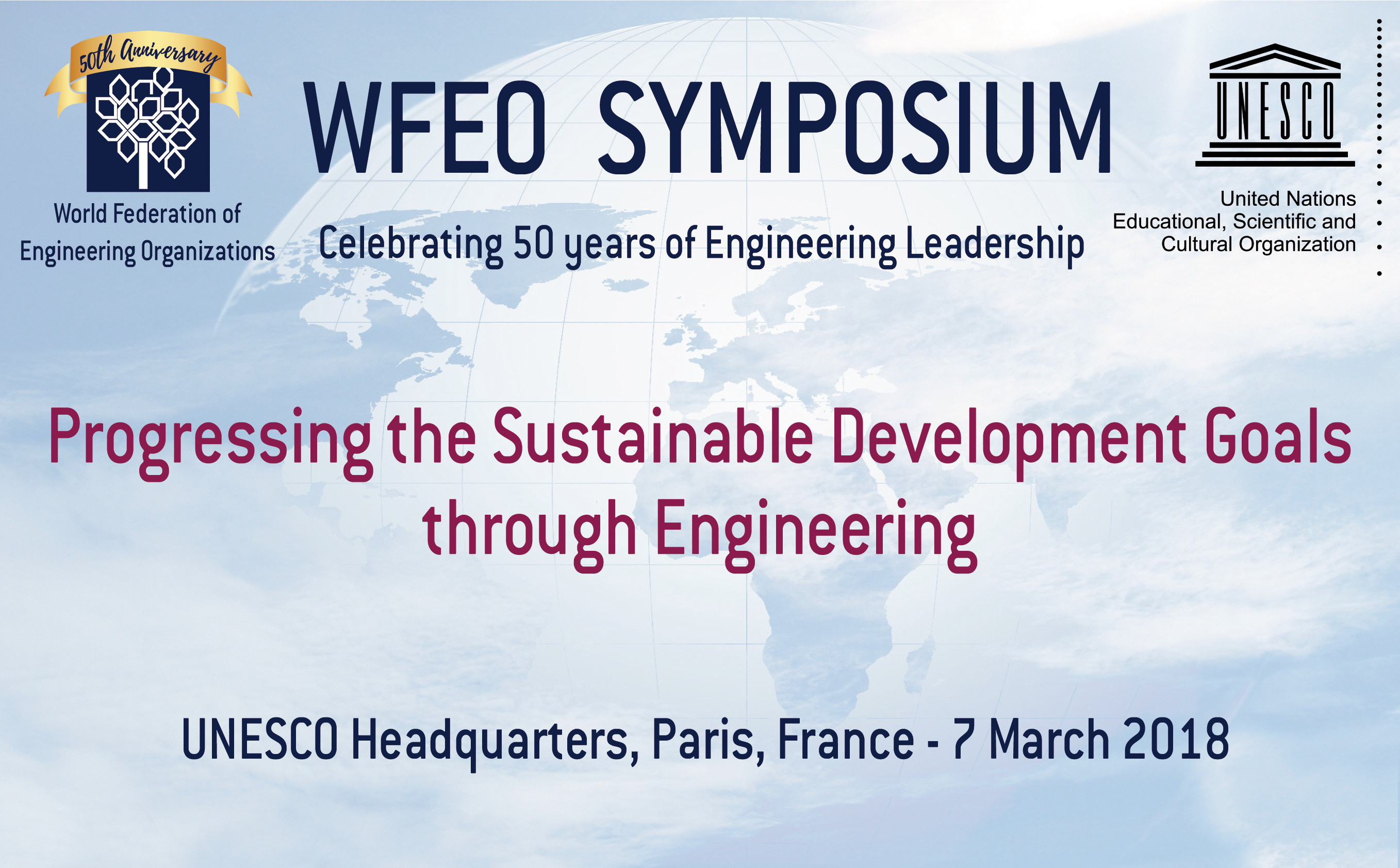 The event took place in the UNESCO Headquarters in Paris and consisted of a half day Symposium, 7th March 2018, with key topics that focused on how WFEO is progressing the achievement of the UN Sustainable Development Goals through engineering. Prominent UNESCO officials were invited to attend. The Symposium was jointly hosted with UNESCO and was attended by many of our stakeholders including UNESCO delegations, UNESCO staff and representatives of NGOs involved in science and engineering.

The Symposium had the primary objective of sharing some of the projects which will form part of the WFEO Engineering 2030 Plan.

WFEO is committed to progressing the sustainable development goals through engineering and is taking the lead in bringing together various organisations and groups so that we can work together in partnership. 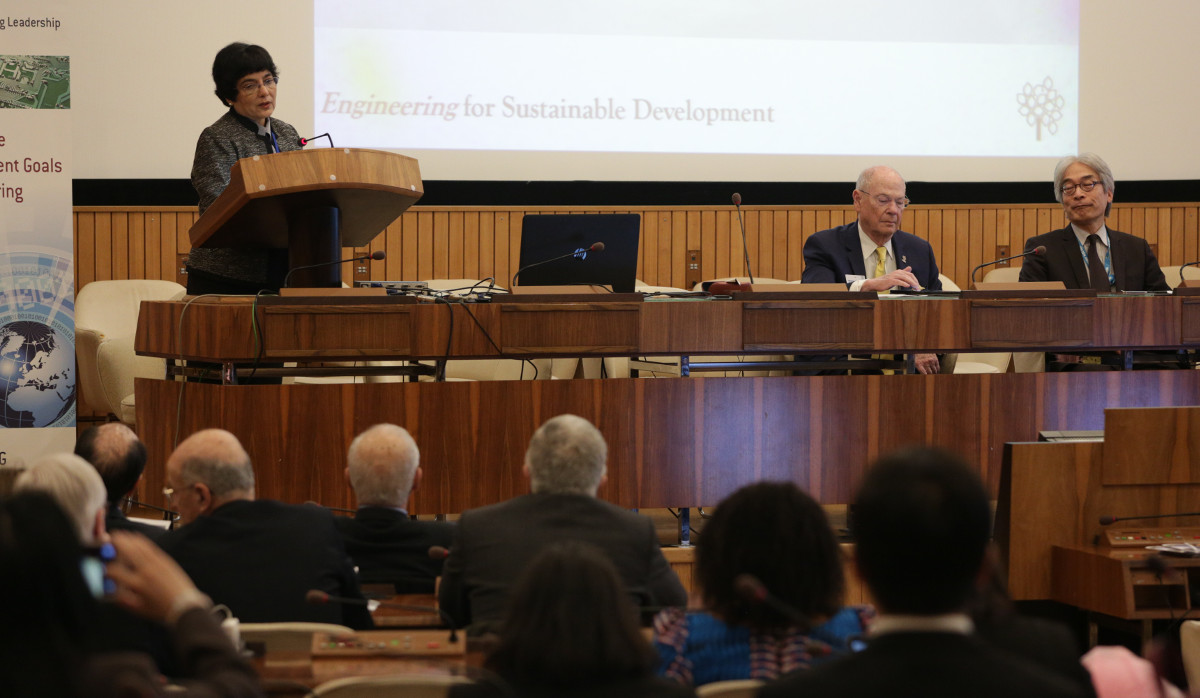 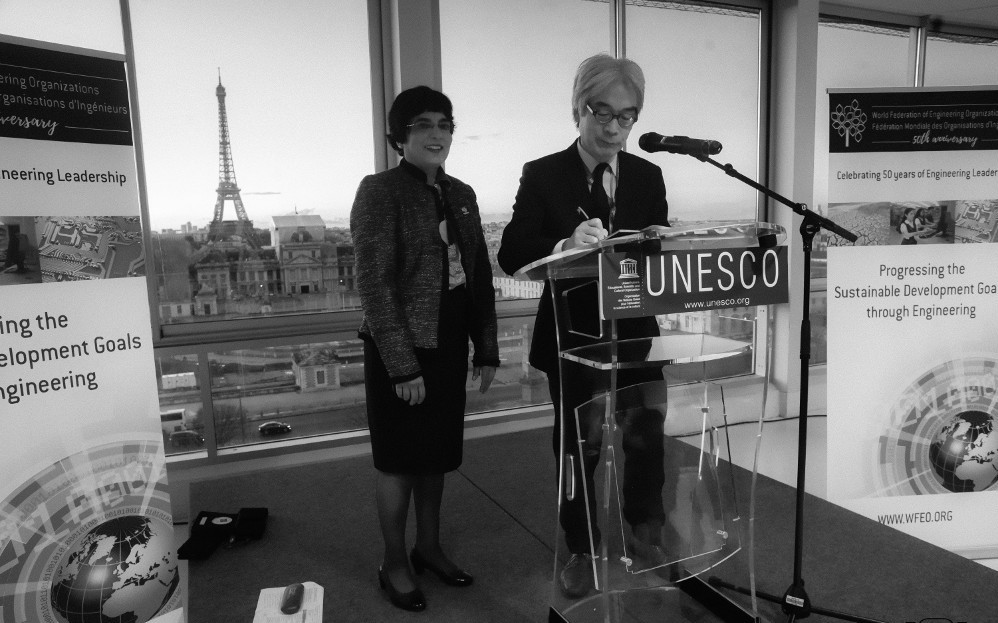 This event was marked by a joint declaration by UNESCO and WFEO on our commitments to progress the United Nations Sustainable Development Goals through engineering.

This Declaration establishes the role that WFEO will play with UNESCO in leading engineering projects which meet this objective.

Our thanks to Mr. Douglas Nakashima, Director of UNESCO’s Division of Science Policy and Capacity Building, for representing Ms. Flavia Shlegel, Assistant Director-General of Natural Science at our Symposium and signing this Declaration.

The Paris Declaration in a booklet format

These partnerships will enable WFEO to work more effectively on specific projects that will progress the UN SDGs.

The signing of the following agreements was the culmination of two years of liaison and discussion with five leading international organisations in engineering:

The video on the future of engineering

The video entitled “Engineering: Building a Better and Sustainable Future” was produced with the assistance of the national member from China, China Association for Science and technology (CAST) and was shown in avant-premiere at the event on 7th March 2018.

The Dr. Zuheir Alami WFEO Award for Engineering Innovation, supported by Khatib & Alami, recognises the importance of engineering innovation at an international level. Innovative companies from around the world applied for this award.
The award will be presented at the Global Engineering Congress 2018 in London.

The GREE WFEO Women in Engineering Award, supported by GREE Electric Appliances Co., recognises the contributions of women to engineering at an international level. Outstanding women engineers from around the world nominated for this award.

The award will be presented at the Global Engineering Congress 2018 in London.

Result of the 2018 GREE WFEO Women in Engineering Award

The announcement of the Young Engineers Competition

The Young Engineers Competition recognises the important contribution of our young engineering leaders around the world to sustainable development.

The best submissions will be published in a booklet which will be available at the Global Engineering Congress 2018 in London.

Result of the 2018 Young Engineers Competition 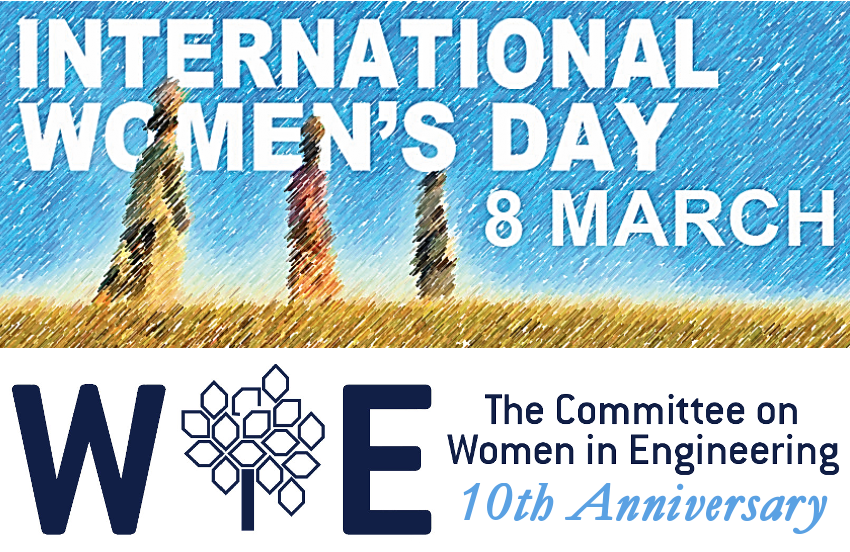 The WFEO Committee for Women in Engineering (WIE) joined the world community in collaboration with UNESCO to celebrate the 2018 International Women’s Day in Paris, France. 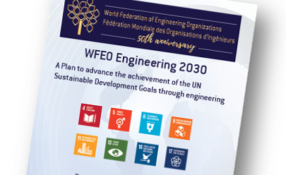 The Plan activates the WFEO Strategic Objectives that were agreed by the WFEO General Assembly in December 2015 and demonstrates the commitment by WFEO, its members and partners, to advance the UN Sustainable Development Goals through engineering.

This document provides an overview of the projects that are being undertaken by WFEO Standing Technical Committees, national and international members, associates and partners. Further progress reports will be provided annually. 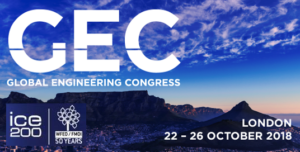 The Global Engineering Congress (GEC2018) and extended WFEO Executive Council meeting will be held in London from 20-26 October 2018. This important event is hosted by the Institution of Civil Engineers UK (ICE). The ICE is celebrating its 200th anniversary in 2018.

The GEC2018 will also include sessions featuring the European Council of Civil Engineers (ECCE) and the triennial civil engineering meetings of the ASCE, CSCE and ICE

The theme of the conference will be focussed on advancing a number of the UN Sustainable Development Goals including water poverty, energy shortages, growing urbanisation and the effects of climate change.

Photos of the WFEO meetings and GEC2018 Conference

Engineering is an essential part of modern life and underpins our health and wellbeing, out social systems and cities and our economies. We will commence a process for recognising the important contributions of engineering with the United Nations for recognition of the WFEO Founding Day, 4th March of each year as World Engineering Day for Sustainable Development.

The purpose of a World Engineering Day for Sustainable Development will be to provide an annual focal point for the continued appreciation of the importance of engineering to modern life and the central role of engineering in developing the technologies needed for climate change action as well as for sustainable development that will impact the lives of every citizen on earth – enabling social, cultural and economic activities in every field of human endeavour, including culture and art, education, sustainable development, and in diverse fields such as scientific research, medicine, information technology and communications and energy.

On the occasion of the 50th anniversary of the World Federation of Engineering Organizations in 2018, the President and Past Presidents say a few words about engineering and the leadership and achievements of the Federation over the past 50 years.

The video was shown in avant-premiere to WFEO delegates for the Executive Board meetings held in Ljubljana, in parallel with the World Construction Forum 2019 (WCF2019) between 6-8 April 2019.