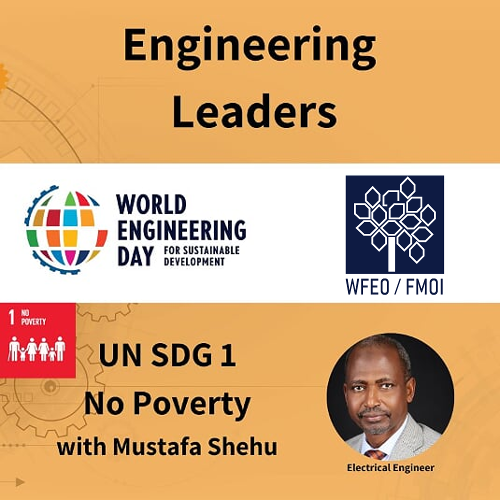 It is not 100% accurate.
The guest was Mustafa Shehu, WFEO Executive Vice President.

Our engineer today is an electrical engineer from Africa. He’s the executive vice president of the World Federation of Engineering Organisations and the chairman and CEO of MBS Engineering Limited a company he helped set up. And it is this company MBS Engineering and in his country Africa that he says is the key to how engineers can provide real impact in moving the world towards the no poverty goal. Speaking to us about the work he is doing on UNSDG 1 is Mustafa Shehu.

Mustafa didn’t have any engineering role models growing up, but he was an incredibly curious child. He was fascinated by everything that was happening around him. He wanted to know how things worked. And there was a lot going on for him to be curious about. His area was in a massive build stage with new roads, bridges and electrical installation. He wanted to know what was in the conductors and why his lights turned on with a flick of a switch and why people would get electrocuted.

So I was actually inspired by what I see around me, not really any person particularly.

Today we’re talking about UN SDG number one, which is no poverty. Can you tell us what that’s about?

as an engineer, as somebody who is also enlightened, it is our responsibility to make sure that this poverty level reduces, otherwise all of us will be threatened.

If you live in a place where most people are poor, then you are also threatened.

You cannot be at peace with yourself when your neighbourhood cannot find food to eat.

So it is a duty upon all of us to make sure that all the people around us, or as much as possible, many of them have something to do to make a good living, to find food and reasonable quality of life.

because the percentage of people living below poverty line in Africa is the highest percentage.

That’s a great goal. Do you have a personal reason or an inspiration why you’re so passionate about this particular UNSDG?

Number one, presence in a very remote village of Kano state in Nigeria. And, you know, that’s why I started my primary school, you know, in German. And then of course, after the death of my father, we had to relocate to Kano City, the capital city of Kano State. A lot of my friends who we started primary school together, many of them could not have the opportunity to further their education to secondary school to university. So their income is really very, very low, because when has to have a feeling and you see people living in deplorable conditions, you will feel very bad. And of course, you will have to think of making a lot of effort also to contribute in bringing them out of that poverty situation. And that is the more reason why we are doing what we are doing here, especially in my company.

When you’re surrounded by such poverty, yes, it’s great that you’re actually standing up and doing something about it

How you as an engineer contributing to UN SDG number one, are there any specific projects that you’re working on?

Yes, with the MBS engineering. So if you go to the construction side of the project we are handling, you’ll find that they’re all sort of people with varying educational qualification can get involved in. And the more you get the job, the more the engaged. You give them little training like labourers, like craftsmen, you have cable jointers. You know you do a lot of cable installations, you give them some training on cable draining, you give them some training on pole erection, you give them some training on fixing cross arms on poles. By that you get them engaged, they will acquire certain key skills that can be used not only in your product, but in any other similar project they find. So while we are making the engineers engaged you’re also making other people, other careers of the engineers family are also engaged. So you see for somebody who has not gone to the university but because he has engaged in one type of work or the other. I played that key Yes. And a reasonable amount of money to enable him to sponsor his child through secondary school education and even through university level. So, you always feel happy when you see that you have contributed something to the development of certain number of human beings. It doesn’t matter the number, it could be high, it could be low.

On the issue of development of human being. No little is too small.

If your capacity is to develop 10 people, fine. If you have to develop hundred people is all right. If you can have the capacity to develop one further or 500,000 people that is great, but no little is too small. We have to look also very wide to cater for the interest of those who have the university education as well as those who don’t even have the university education. Trying to provide something that will bring people out of poverty line. And

there’s no way you can get out of poverty life without having a skill,

Yeah, it sounds like there isn’t one single project. It sounds like every single project you do, in the back of your mind, you’re very conscious that I’m employing people here. And by doing that, I’m moving them away from that poverty line and I’m allowing them to make, give options to their children and that’ll just continue on down the trains. It’s really a great perspective in things. Specifically speaking, is there a particular goal that you hope to achieve in 2020 in regards to helping this specific, no poverty UNSDG?

Well, the project we have started the feasibility studies have done 132 kV line from one of the first stations in Legos to Atlantic City. Atlantic City is a very huge project in Nigeria, that is made of every reclaim in ocean, by about 10 square kilometres, of course, space to would need to be reclaimed, you know, to build a lot of hotels, offices, sports facility, educational facilities and educational institutions and as well as labour facilities. So we have just finished the feasibility studies. The contract is about to be awarded and we are going to be the engineers. The project is to take power supply of up to several hundred megawatts. But that pattern with the two by 75 MVA a lot. So this is one particular project, we are about testing. And there are also other projects we are about to commence in extension of 132 and 330 kV to the northern northern corridor. There is also a lot of towns and cities in northern part of Nigeria, that had to be connected with 330 kV transmission line. So, we are about to start that when this is going to be huge for them that can take us more than maybe three to four years.

How many people would you be looking to hire over the course of those projects do you think just roughly?

Well for the Atlantic City project we are going to, because we are going to be involved in primarily in the supervision of the project. We are going to involve about 35 people you know, but for that project, the northern corridor project we are going to employ more than 45 people. You know for for that project. Having that project alone will attract a lot of economic activities around that area. And a lot of people will be gainfully employed. It is going to be very huge project. Because Nigeria has a very huge deficit of electricity. So, the government is trying a lot to make sure that this deficit is being breached. A lot more people have to be employed. Probably by the middle end of this year, where our employment, we will go more than six to 10 times what we have today.

Sound like a great, massive project. So that sounds wonderful.

Yeah, it does sound wonderful. Thank you so much for joining us today. It’s been wonderful speaking you.

Mustafa Shehu is an electrical engineer from Africa.

He is the Executive Vice President of the World Federation of Engineering Organisations, and the Chairman and CEO of MBS Engineering Limited, a company he helped setup.

And it is work in Africa, that he says is the key to how engineers can provide real impact in moving the world towards the No Poverty goal.