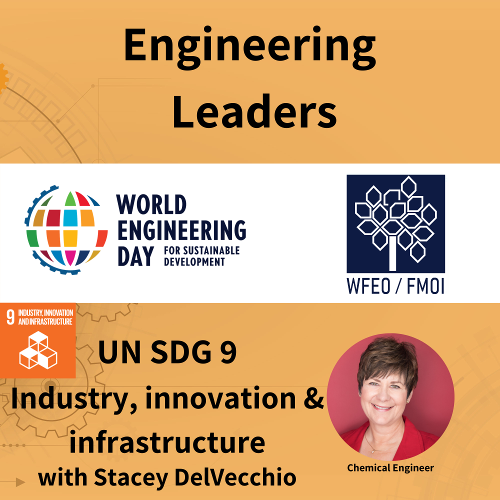 It is not 100% accurate.
The guest was Stacey Delvecchio, WFEO Committee on Women in Engineering secretary.

Our guest today is a chemical engineer and is working in the very exciting and very new industry of 3D printing. She spent most of her 30 years working for Caterpillar where she was the Additive Manufacturing and Product Manager. But she has branched out and now has her own consultancy. While she is speaking to us on the United Nations Sustainable Development Goal 9, our guest is also very passionate about gender diversity in engineering. She’s the vice chair of the Women In Engineering Committee for the World Federation of Engineering Organisations, and she also represents the American Association of Engineering Societies. Speaking to us today about industry, innovation and infrastructure is Stacey DelVecchio.

Stacey was inspired by her high school math teacher, Mr. Buddy. He’s passion and excitement for calculus and mathematics was integral to Stacey and she really wanted to understand how she could apply her excitement and talent for math in the real world. Her career counsellor was very good in helping guide her and her parents while being small business owners and not engineers, supported and encouraged her to follow some engineers and learn from them. 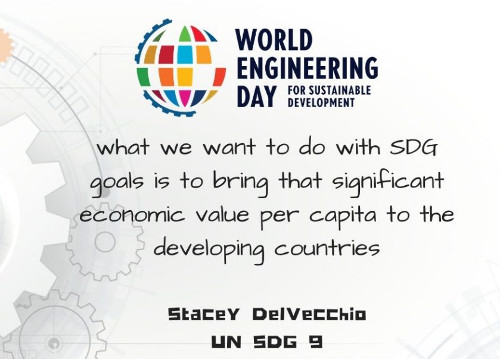 So it was with the help of these adults in my life that really lead me to something that became a love of mine.

Yeah, it sounds like they’ve really guided you into something that’s been great for you.

Here is a book, read it.

… it is really strong correlation to the fact that good guidance counsellor provides a very solid foundation.

Worth their weight in gold, those people.

Although we were meant to be talking about engineering.

So anyway, actually. And the episode that we’re talking about today is about UN SDG 9, which is called Industry Innovation and Infrastructure. Can you let us know Stacey a little bit about what that means?

Sure, especially when you use

words like infrastructure that sounds like a big word. But really, it’s about pulling together manufacturing and innovation.

There’s all kinds of data that says that the value add and the value that manufacturing brings back to the economy is significantly higher in Europe and North America versus developing countries. And

what we want to do with SDG goals is to bring that significant economic value per capita to the developing countries.

And I’m really passionate about the fact that manufacturing is not just an old boring job.

There’s some exciting and interesting things going on in manufacturing, like my work in 3D printing,

that’s all about innovation. You know,

innovation can happen and does happen every day in manufacturing.

And I think bringing those two together with the infrastructure industrialisation and innovation is where we get to with SDG 9.

Excellent and what was your inspiration in aligning your work to SDG 9?

I ran into SDG 9 nine and how my work in line with a quite frankly by accident. I have over 30 years in being an engineer and working on product development and manufacturing, that’s where I spent my whole career as an engineer. And it wasn’t until five or six years ago, that I got pulled in and asked to lead some efforts at the company I was working for on 3D printing. Now, I will tell you at the time, I did not see myself as an innovator.I was more of a, let’s get things done and what needs to happen. So I was a little bit intimidated to be with all these people that were thinking of all these crazy ideas about what we needed in new and where we should go. And it helped me to see the value I bring to that sort of group of people. So it really helps. If you have a bunch of really innovative people. If you have somebody who’s a little bit more organised and we’re working on “Hey, we need to get something done by the end of the year.” And so it really helped me to realise I can play a piece in this community. And then when I started getting involved with SDG goals, it really was like, wow, there’s something on there that applies to me that I can help contribute.

So how as you as an engineer contributing to UN SDG 9? Are there specific projects that you’re working on? Or is there something like that sort of ties in with that goal?

So my expertise, I would say, in 3D printing is about the business side of it, and the value added piece of it, and in a sector where there’s not as much work being done. So in 3D printing, a lot of the stories you hear about are on aerospace or medical, those are probably the two, you know, early adopters. There’s all kinds of amazing stories in that front. My background, I spent 30 years working at Caterpillar so like the big heavy duty mining equipment, and I was responsible for the implementing 3D printing at Caterpillar and everybody’s like, what’s Caterpillar doing?

What are you printing?

Yeah, what are we printing? So there’s this so even though the equipment is absolutely huge. And if people are not familiar with equipment, a lot of times it could be as big as the size of a house. So very big, but when you have something that big, there’s a lot of little parts that are inside of that equipment. And so my expertise is on that kind of huge industrial heavy duty application. And it’s about bringing 3D printing to that world. And so those are the projects that I’ve been working on is helping other engineers see where does it make sense for 3D printing, it to be used and where does it make business case. It usually makes a good business case if you’re in a remote area, or if you only need one or two, because you have a part that’s very old and you can’t get it anymore. And as well as new product introduction where you’re thinking about making something that’s got some features, maybe advanced cooling or something like that, that you wouldn’t normally have. Now I have retired from Caterpillar and I’ve gone on to start my own consulting company that is focused on that exact same thing, but in that big industrial sort of sector. So not the medical, not the aerospace, it’s sort of the people that are now launching 3D printing in their product in helping them understand where the value is. So it’s all about that bringing innovation from a manufacturing point, to

help them see how they can move their manufacturing to something that’s more relevant and has some value added availability for the market.

That’s brilliant. That’s so inspiring to hear that the use of this 3D printing is having such a wide impact. So enhancing industry like that and yeah, it’s just it’s a fascinating space to be involved in.

Yes. Yes. It’s been very rewarding for me.

Do you have a goal for 2020 regarding the advancement of this innovation into industry and infrastructure?

So a couple things that I want to do to help move this forward and get people thinking about, yes, 3D printing innovation, let’s bring this to manufacturing and keep things moving and exciting that field. So I’ve got a couple different things going on. One of them is that I’m involved with the Society of Manufacturing Engineers. So, I’m in the United States. So this is the United States professional society. And I’ve been advising them on 3D printing. So we are working on different ways to get the message out about manufacturing and that manufacturing is not the manufacturing that you think of from the 1960s or 1970s. And so we’re doing some little snippet videos. Not necessarily podcasts at this point, but trying just to say, hey, here’s what we’re doing. Here’s what’s exciting about this technology. So I had that going on, which is is more like an ongoing sort of goal. But one of the things I’m excited about is I just launched the efforts to start a book to highlight some of the industry leaders and trailblazers that happened to be women in the 3D printing area. So it’s a book where each chapter will be about one of these trailblazers, and then they are all women, because that’s another one of my passions is to be sure that I’m advocating for women in the area. So I have to get everything to my publisher by the end of the year. So it’s very much a 2020 goal for me, otherwise, I won’t be meeting my goal at all.

That is a great, what an audacious goal for. Is it your first book?

Yes, you know, and I’m an engineer. So typically engineers don’t like to write and I’m right there. I don’t like to write. So it’s a bit of a challenge for me. But I think it’s a nice sort of challenge at this phase in my life, and I really do like to highlight the work that other people are doing. So while I’m writing the book, really, it’s all about these other women who are telling their stories about 3D printing. You know, and I just found out there’s a woman doing 3D printing to print makeup. I’m like, what a great way to highlight a woman with 3D printing.

Yeah, it’s definitely. It’s the way of the future. So yeah, it was something that for a while there, it seemed like it was coming. But it was, it was so far in the future, whereas now it’s just seems to be technology that’s here today.

And just the way it’s being used. And so what you’ve explained to us about how this innovation is being used within industry it’s really open my mind to seeing how your work can be tied into the UN SDG Goal number 9. So thank you so much for that.

It was wonderful. Thanks for joining us.

Stacey DelVecchio is a chemical engineer and is working in the very exciting and very new industry of 3d printing. She spent almost 30 years working for Catepillar where she was the Additive Manufacturing Product Manager. But has since branched out and now has her own consultancy.

While Stacey is speaking to us on UN SDG 9, she is also very passionate about gender diversity in engineering. Stacey’s the vice-chair of the Women in Engineering Committee for the World Federation of Engineering Organization where she also represents the American Association of Engineering Societies.

Speaking to us about Industry, Innovation and Infrastructure is Stacey DelVecchio.