Engineering Leaders Podcasts - Partnerships for the goals with Gong Ke 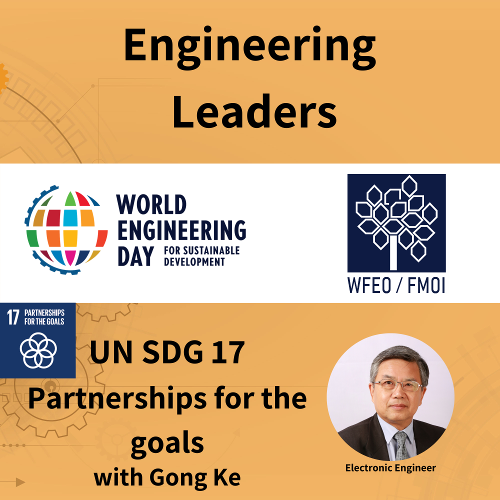 It is not 100% accurate.
The guest was Gong Ke, WFEO President.

Welcome to Engineering Leaders. This is our very last official episode in our mini series in the lead up to the very first World Engineering Day for Sustainable Development in 2020. It’s been a mini series supported by the World Federation of Engineering Organisations. My name is Melanie and my co host and our podcast’s resident engineer is Dominic. This very last episode is going to be on the United Nations Sustainable Development Goal that is holding everything together. We’re going to be talking about the UN SDG Number 17 Partnership for the Goals.

Our guest trained as an electrical engineer and is the current standing president of the World Federation of Engineering Organisations. He also holds the positions of executive director of the Chinese Institute for the New Generation Artificial Intelligent Development Strategies. And the chairman of the Academic Committee of Nankai University. Our guest has held many academic positions in various universities and earned many awards for his research in areas such as wireless communication and microsatellites. Speaking to us today about partnerships for the UN Sustainable Development Goals is Gong Ke.

Ke’s future was greatly affected during the decade in China called the Cultural Revolution, which went from between 1966 and 1976. Because of this revolution, Ke lost his chance to study further in high school and was sent to a factory as a 15 year old to work. In his work at the factory he says he ran into a lot of problems. And it was the trained engineers at this factory that helped him to better understand why the work had to be done in a specific way. And these engineers that helped him out along the way, changed his life.

They did give me a lot of help. And they really became a model of my life. And I really want to became a problem solver, like they are. And I think that’s the motivation for me at the very beginning to study engineering and keep the engineering area.

Excellent. So the podcasts that we’re doing at the moment, we’ve been going through the UN Sustainable Development Goals, and this podcast in particular is in regards to UN SDG number 17. So partnerships for the goals. Can you tell the listeners out there just exactly what that is so that I can have a better understanding of what UN SDG 17 is about?

We have totally 17 Sustainable Development Goals.

The partnership is the last of them, but it’s never the least.

The importance of this goal is clearly stated in the text of the UN agenda. It reads,

we recognise that we will not be able to achieve our ambitious goals and targets without a revitalised and enhanced Global Partnership.

The revitalised global partnership will facilitate intensive global engagement in support of implementation of all the goals and targets. Bringing together governments civil societies, the private sector, the United Nations system and other actors and mobilising all available resources to share knowledge, expertise, technology and financial resources in all countries in particular developing countries. There is clear statement of the Global Partnership. And you know,

the World Federation of Engineering Organisations, to which I’m serving as president, is a platform of Global Partnership in engineering.

The World Federation of Engineering Organisations is a perfect example as your were saying of partnerships coming together under one umbrella with the goal of the sustainable development that is an actual example of partnerships in action.

only with revitalised partnership, we could fulfil our mission, I mean the mission of WFEO, to engineering a sustainable world.

We’re keen to understand why it’s important for you or why you’re inspired to actually align your engineering work with this United Nations Sustainable Goals. So, your why.

engineering is the process of solving problems by using scientific technological knowledges.

Our engineers are problem solvers.

That is why the goal of global partnership is set in the UN agenda. And that is also why the engineering organisations worldwide came together 51 years ago to establish the World Federation of Engineering Organisations, I believe

to solve the problem of sustainable development, engineering is the key.

And the global partnership of engineers is also the key. As the president of the WFEO I do have the thought that

WFEO has the responsibility to promote the revitalised partnership of engineering organisations and the engineers worldwide to engage into the practice of sustainable development.

That’s the thought, deeply in my mind, I think that is the inspiration for me to align in my work in these Sustainable Development Goals, especially the global partnership.

That was so well said and the way you said that an individual will need to work as a team to achieve something. And then to relate that back to a single country needs other countries to help solve problems. That was I really liked that that was very eloquent.

How are you as an engineer of the WFEO, contributing to you UNSDG 17. Like, are there specific projects that you have, that you’re working on?

So you know as an engineer, my background is Electronic Engineering, which is a fast changing field, especially in the past decades. And in recent years, my research focus is mainly on artificial intelligence as a head of the Chinese Institute for the New Generation Artificial Intelligence Development Strategy. We put our emphasis on the development strategy of AI and the governance of AI to ensure that is for the good of human and the sustainability for which a global partnership is not only necessary but imperative. We are working with WFEO Standing Technical Committee of Engineering for Innovative Technology on drafting the proposal of the principles for the responsible conduct of artificial intelligence in engineering, which is planned to release on the first World Engineering Day. In last year, I have attended several UN and other international meetings related to AI. For example, in Paris at the UNESCO mobile learning week in New York, at the United Nations Scientific Technological Innovation forum, in Beijing as a UNESCO AI education conference in Luton, at the World Internet forum, and in Korea at the Digital Peace forum and others. I constantly stressed that people should recognise the dual attributes, that is the technical and social attributes of AI and

I strongly, repeatedly call for the global dialogue,

to reach a international consensus on the principles as a first step, and then to turn these principle consensus into laws, rules, regulations, and technical standards, to establish effective technical tools for engineers to test and verify the principles are embedded really, in the AI system, and to educate people to respond to research, develop, design, implement, use and manage the AI system. So we really work hard, try to build an international open platform for the further development of the AI system and the governance of AI system to ensure it is good for all the people.

That’s a huge goal. That’s a huge endeavour to bring the entire world together to all agree on such protocols. So no wonder you’re travelling a lot.

Yes. And you know that

because of the geopolitical conflicts, it is still a lot of difficulties to set up a real international collaboration

on artificial intelligence and its applications. So we are working hard to promote the international collaboration and to have a closer link with partners.

You’re releasing something on the on World Engineering Day on the fourth of March. Have you got another goal in mind for 2020? Or is that is that big enough?

Yes, for this specific or year, the year 2020 we are working together with IEA a that stands for International Engineering Education Alliance, and ICEE that’s the International Centre of Engineering Education, which is the UNESCO secondary centre, to review the current engineering education specifications of the graduate attributes and professional competencies in order to find out the gaps to the requirements of SDGs and to complete the proposal to amend the current standards for further discussion worldwide. The ultimate objective of these projects is to reach a global benchmark standard, to ensure the quality engineering education for sustainability and to better facilitate the international cooperation and engineers mobilisation across the border. In this year, we’re going to complete a very important proposal to the amendment of the current world standards of engineering education. That’s a very definite objective of this year with global partnership.

It’s a very bright future for engineers. That’s for sure.

This will be a busy year.

It will thank you so much for joining us.

Thank you. It’s been very, it’s been wonderful hearing you talk about all the partnerships that WFEO have and how they are all working together.

Thank you. Thank you so much.

Gong Ke trained as an electrical engineer and is the current standing president of the World Federation of Engineering Organisations.

He also holds the positions of Executive Director of the Chinese Institute for the New Generation Artificial Intelligence Development Strategies, and the Chairman of the Academic Committee of Nankai University

Gong Ke has held many academic positions in various universities and earned many awards for his research in areas such as wireless communications and micro-satellites.

Speaking to us to day about Partnerships for the UN’s Sustainable Development Goals is Gong Ke.