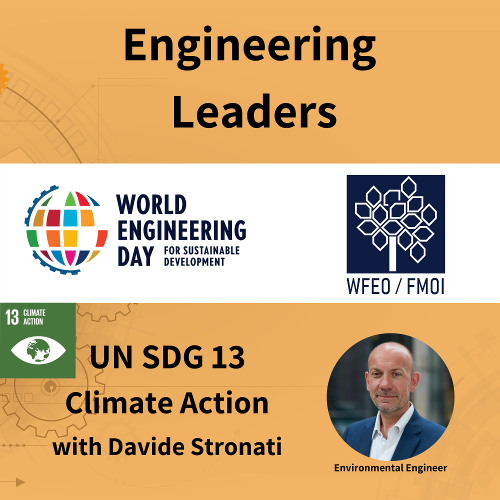 The guest was Davide Stronati, Chair of the Committee on Engineering and the Environment (CEE).

Davide started out as a mountaineer and that led to his engineering career. Growing up in Italy with the Alps right on your doorstep, it’s probably not that surprising actually. Being a mountaineer Davide had an appreciation and a love for nature and being active. He enjoyed the engineering aspect of things and had an opportunity to get involved in environmental engineering specifically.

Marrying my passion with my intellectual curiosity to know more how I can solve problems.

This mini series that we’re doing, as part of World Engineer’s Day is specifically around the Sustainable Development Goals. So, today we’re actually talking about SDG goal 13 climate action. Can you give us a bit of a rundown of what that involves?

As you said, the SDG and number 13 is all about climate action. We need to bear in mind that each of the SDGs has specific targets and indicators as well as set by the United Nations. But I think that that very same goal, climate action is a great one because effectively,

anything that has to do with mitigating adapting to climate change is under climate action.

This is precisely what the SDG means, in my opinion, and it is fully applicable to each of us engineers in particular.

I think it’s such a critical goal. Whilst we’ve been talking to, to obviously a lot of engineers in regards to it. All the SDGs are very important. I think climate action is, is proving to be something that’s extremely critical at this present moment in time.

Yeah, indeed, as you said effectively the reasons why basically we have climate change right now is precisely because our economy has been based for the last year as entirely on fossil fuels and these was used for energy and materials as well as being so, granular the use of fossil fuels in everything we do. This quite difficult to replace the fossil fuels in our economies in our daily life. And therefore, this is proving that a

but equally on the material aspects. Because effectively it is present in plastics and so on and not last, the behavioural aspects because we are used to living our lives as we do.

There’s going to be a lot of behavioural change and social change that would be needed on the top of the technological innovation that engineers would bring.

It does filter through so much of society this one. What was your inspiration for aligning yourself with climate action and UN SDG 13

Engineers and then engineering, I think it is particularly adapted and clearly aligned to individuals that want to solve problems. Even better if these problems are, maybe there’s more on the environmental and civil engineering, if they are social problems. And as I said, climate change is indeed a social problem. It is a problem that is affecting all of us, wherever we are based in developed countries, developing countries living along the coast or you know, living in a flooding area or in the risk of droughts. And therefore, we see, I see and climate change as the topic where we will need lots of creativity from engineers because so far we’ve been using our time and investing on creating awareness and acceptance of the problem, but I think now is the moment of taking action. We’ve been seeing these taking action at COP 25 (Committee of Parties) in Madrid. It was very present, the hashtag everywhere, time for action. And if I may say engineers are ideally placed in taking action and in finding solutions to problems.

So just on that, what do you as an engineer contributing to you UN SDG 13?

So, at the end of November last year, I became the chair of the Committee of Engineering Environment and the World Federation of Engineering Organisations. And one important thing that I learnt is that climate change has different meanings in different countries. It can be remarkably political in some countries, while in others, it is widely accepted as an event phenomena. And therefore, in these countries where climate change is accepted, there our climate emergency declarations, from engineering bodies. So the idea came to have a World Federation of Engineering Organisations and declaration of climate emergency that can be implemented across the board, across all the different members of WFEO. As simple as that. So the idea was a good idea. And it flew immediately because it took literally four days to write it and sign it by the executive board OF WFEO. And since then it’s been a fantastic success. Because as I was trying to say, it’s been translated into Mandarin and the Chinese colleagues, they adopted. So it is now, it is great. So China adopted on, I think almost Christmas Day on the 24th of December. So that was a fantastic present. It has been, it’s been translated into Spanish in French, in Arabic. So I think there’s a big push now in getting as many members of WFEO as possible to sign to the Declaration on time for the fourth of March, the World Engineering Day for Sustainable Development, but for sure for COP 26 in Glasgow.

So what sort of things were you doing at the COP 25 at Madrid recently?

I was learning. It was my first COP. And there was such a steep learning curve. It was learning by doing – that I think is is really the best way. I attended events, I talked at events as well. And that was an eye opening experience, because there’s so much expectation from COP. And there’s so much social pressure as well and there are lots of demands from the different corners of this planet. And therefore, I understood even more that we need to deliver the change that has been asked by the civil society by society increasingly by the financial sector, but

I have a strong feeling that from next COP onwards, engineers will take a much more leading role in the discussions because effectively, we will be talking much more about solutions, than the problem.

That was an amazing ending to 2019 having that declaration of climate change, emergency signed and enacted so what’s the goal for 2020 around this climate action UN SDG?

The very basic of course, is to have all 95 National members of WFEO (correction: there are more than 100 national members), signing up to the declaration and also the 10 supernatural members as well. But actually moving forward, because if it is great they to the declaration, I think we will need to take action on the declaration itself because it has 11 very clear points, the declaration and we need to make progress on each of them in each member organisation. So I think that, you know, we want to be ambitious, but equally we want to give us time. Next year 2021 is going to be the all across the world implementation on the declaration. For this year, we focus on as many countries as possible to sign it but of course already started working with the ones that signed at the end of last year to make progress during this year.

We will have the link to that document on our show notes page for this UN SDG. So, thank you so much and best of luck with getting everyone to sign this declaration because I think it sounds like a great step forward.

Yeah. Thanks for joining us. It was wonderful.

Thank you, Mel. Thank you Dom. I hope I transferred the passion and the plans for WFEO for myself relating to the climate action.

Absolutely, definitely. And thank you for tuning into Engineering Leaders as we prepare you for the first World Engineering Day on Sustainable Development, which is going to be held every fourth of March. We hope you’re enjoying our mini series which is brought to you with the support of the World Federation of Engineering Organisations. The best way for you to show your support for our show, is to tell people, either in person or write a review. Just spread the word. Seriously, it is that easy. We look forward to you and your friends joining us next time when we bring you another episode with one of our engineering champions.

Since 2012 Davide has been the Global Sustainability Leader of Mott MacDonald and is currently working on a number of boards. He is Chair of the Committee on Engineering and the Environment, for WFEO and the Sustainability Leadership Team at the Institution of Civil Engineers.